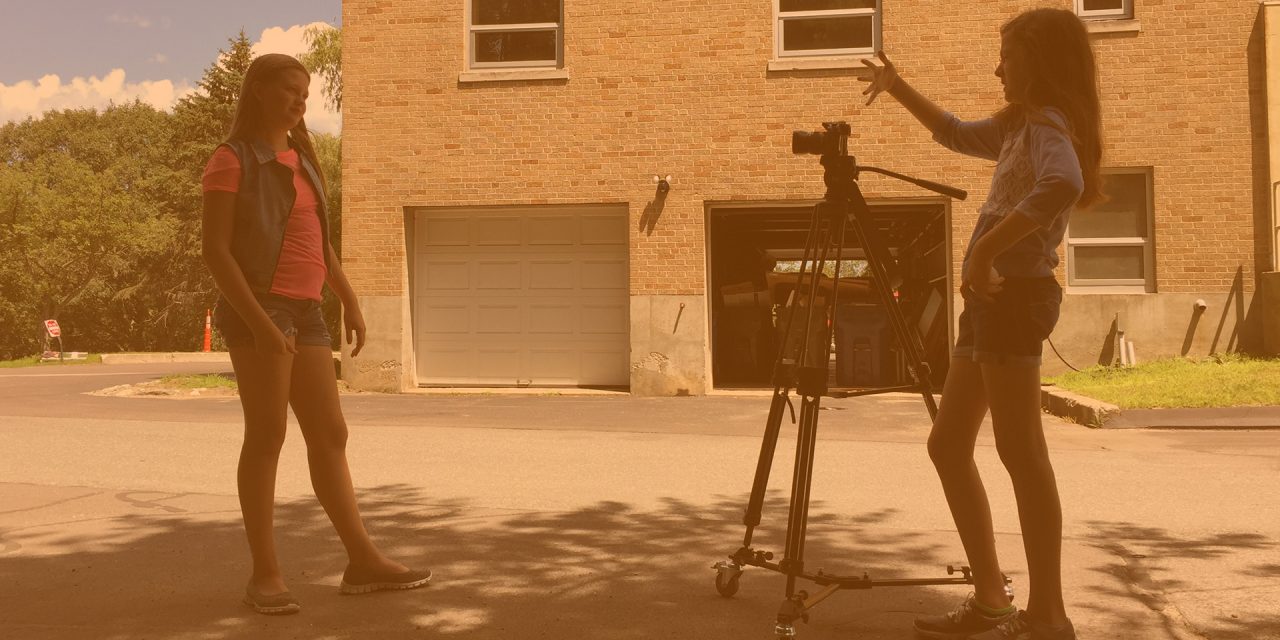 Now that students are beginning to think of their video as a compositional art (rather than just pointing the camera at the action), they need to begin to understand the basic vocabulary of filmmaking. That’s shot types. Students already have a basic understanding of shot types—zooming in means emphasizing something, zooming out gets more comprehensive shots. However, it’s useful for them to begin to think of a scene like a baseball lineup, in which players are ordered to maximize effectiveness (for the non-baseball fans: the guy who gets on base the most usually goes first, the most powerful hitter goes third or fourth so people can get on base for him to homer in, etc.) What angle should the scene “lead off” with? What angle captures all the detail of the shot? What changes close it out?

There are tons of resources online that explain the simple vocabulary of shot types. Here’s an effective simple video that does the trick:

And here is an article for the text-friendly folks, that also covers concepts like establishing shots, which we’ll take a look at a bit further on: http://www.elementsofcinema.com/cinematography/framing-shot-sizes/

I don’t get too hung up on the vocabulary, as different cinematographers use different words and there’s a whole lexicon of language that all virtually means the same thing. I prefer to focus just getting the following vocabulary in the student’s head, of a five-step continuum moving from very zoomed-out to very zoomed-in:

Extreme/Ultra Wide/Long Shot: Gets landscapes, buildings, scenery in shot. Person is small, and takes up small percentage of pixels. Good to showcase a setting.

Wide/Long/Full Shot: Gets all of a person in a shot, feet to head. Good for introducing a character.

Medium Shot: Gets half of a person in shot, from waist to head. The bread and butter most common shot, as a character’s legs typically reveal little about a character, and the show still provides space to showcase body movements.

Tight/Close-up: Gets only head in shot. Great for showcasing emotion in a character.

Extreme/Ultra Tight/Close-up: Gets only one body part in shot—wide eyes, pursed lips, trembling hand, tapping foot, for example. I emphasize to my students that this shot is one that is underutilized by most student filmmakers. A major objective of cinematography is to show the world to people in a new light. In our day-to-day lives, our eyes rarely get extreme close-ups… it’d be rather awkward to put your eyes inches away from a trembling hand. And that’s why these shots can be extremely effective to bring a video to life.

Express that this vocabulary is important so filmmakers can collaborate effectively with a common understanding. A director can tell a cinematographer to try a “long shot” of an actress, and they’ll both know exactly what that means.

Find a short scene of a show you like (30 to 60 seconds), perhaps the same scene from last lesson. Write down the shot types that are used in each cut of the scene (explain that a cut is when the editor switches camera angles.) Then, determine how the scene would appear different if the cuts were ordered differently.

Screen the scenes to the class, and break down the shot types.

Students should practice thinking in terms of shot types in their pre-production work. Have students express where in their video they will use the five-different shot types. For example, students can express their scene like this:

Extreme wide shot of school, as Johnny walks into the building.

Tight shot on Zoey’s face, as she turns around and sees Johnny.

Full shot of Johnny as he makes eye contact with Zoey.

Full shot of Zoey as she makes eye contact with Johnny.

Extreme tight shot of Johnny’s eyes as he sees her.

Extreme tight shot of Zoey’s eyes as she sees him.